With fasting month over, time to get back onto the saddle.

Not an ideal day out for a recess ride. Gloomy and overcast. Turned back immediately with the showers coming in. 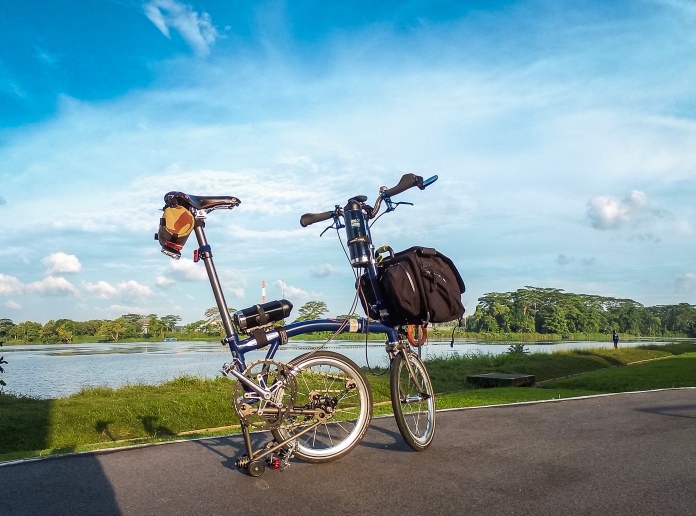 One of those days where I get to bike home from work. At the same time, conducting a recce for an upcoming ride. Gorgeous evening it was. Used to stay at the town in the background. Lovely memories there.

Well, it’s getting late. Time to zoom home, with another 20-odd clicks to go.

Did a group ride with a bunch of B pals. No agenda and route. Just riding around till where it takes us. 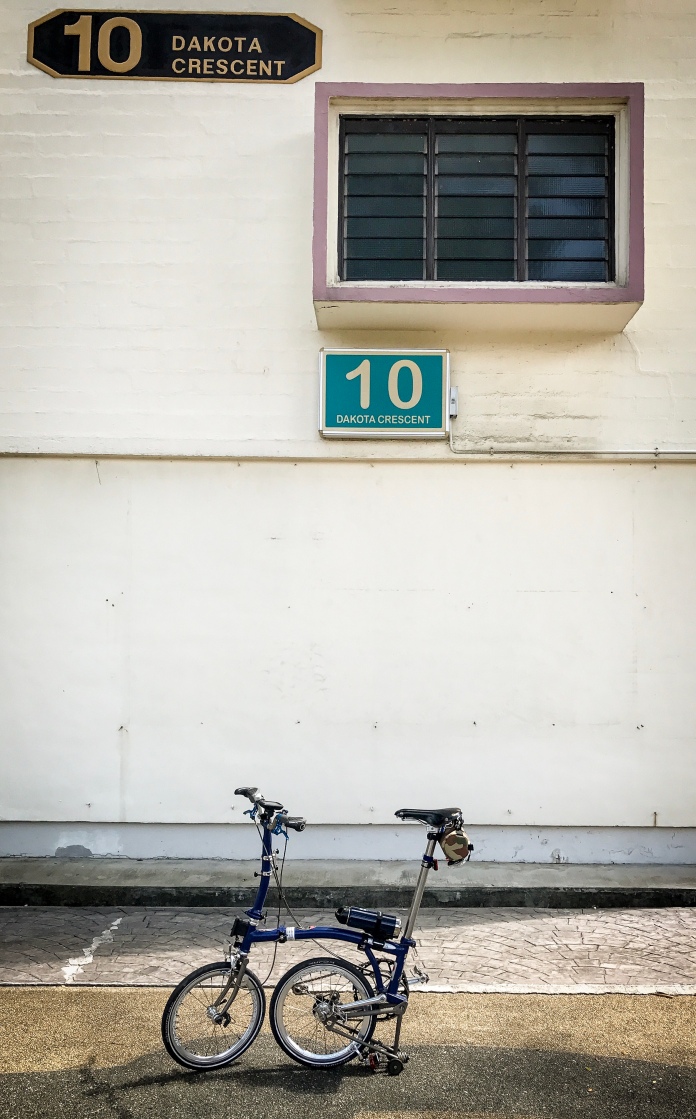 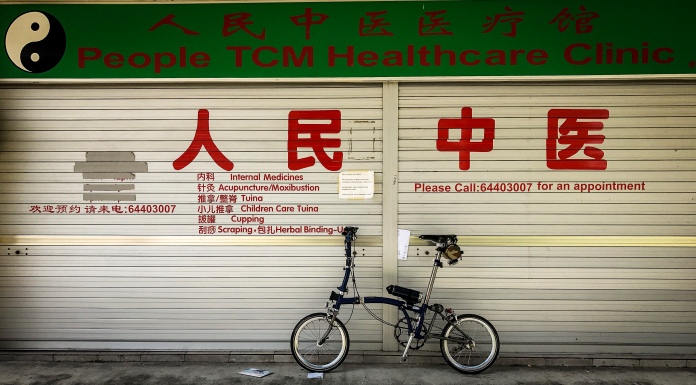 The ride took us to an abandoned housing town which is slated for demolition to make way for newer housings. Rustic place with a lot of character.

July had been fun. Wish it will continue in the months to come.

Till the next time, ciao.

Good day to all. It has been a long break for me from here ever since the last entry. The last 2 years was a hectic time at work, restructuring and refocusing on the direction, vision and mission.
Nonetheless, there was still time set aside for some exploration on the wonderful Brompton. Here are the updates from 2016 itself. Mid-2014 to end-2015 will have to be included in the next entry. 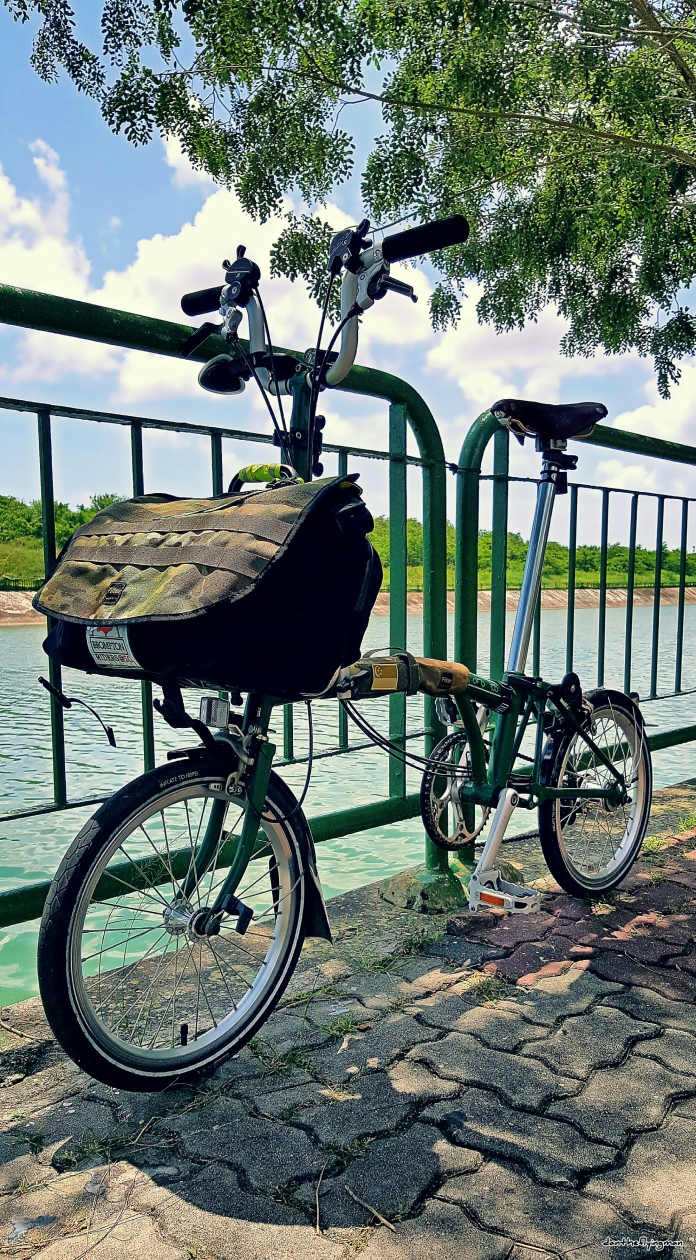 Acquired the 4th Brompton in one of my favourite colours, Racing Green.

Final look of the 4th Brompton after swapping out the H stem for a M stem and adding a rear rack.

The last year also saw my missus and I shifting to a new location. 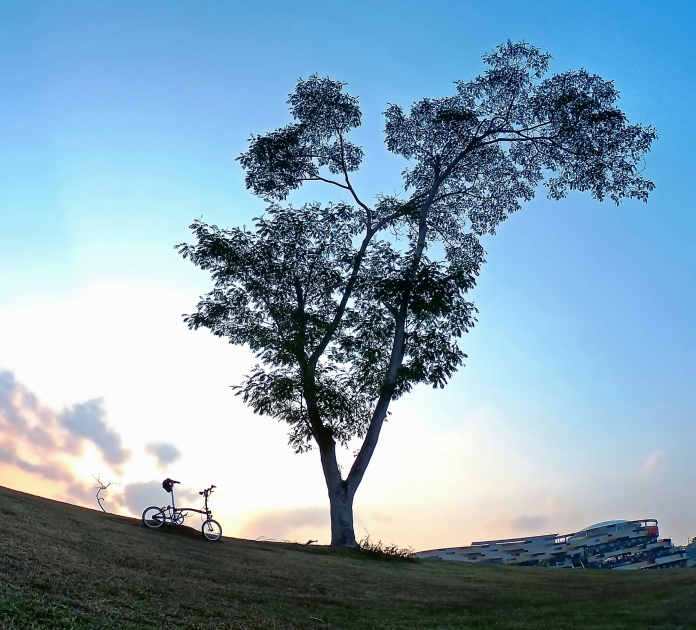 One of the many gorgeous sights the new area I shifted to has to offer.

Took me some time remodelled the storage and display area for the Bromptons. This is after selling a Montague and an Alex Moulton.

It has been a while since I posted. The month of April and May was hectic with work back to back. Nonetheless, I still managed to squeeze some time out for riding.

Brought the nephew out for his first long distance ride on his fixie. Must saw he is doing great, averaging 12km/h for a total distance of slightly more than 11km. 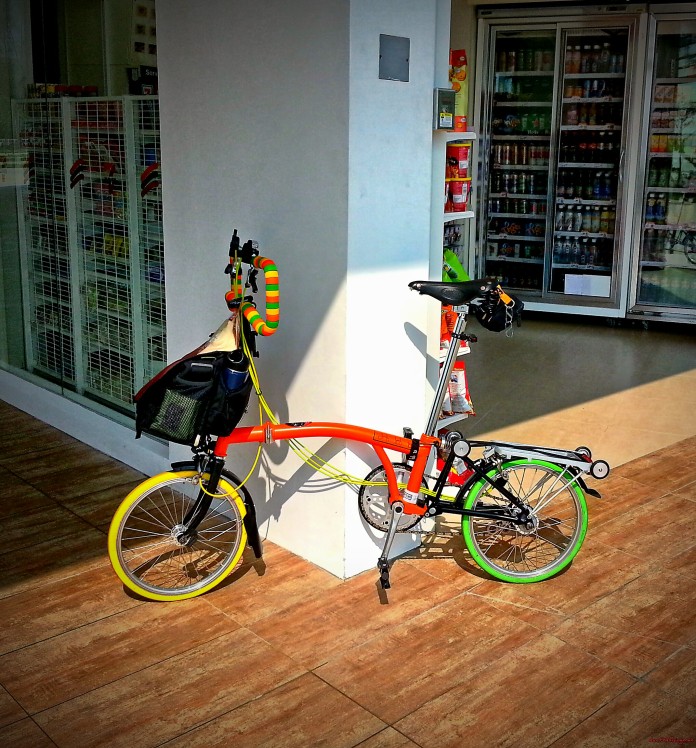 My last ride on Tannus tyres. Had planned to attempt a half island ride but abandoned the idea at the quarter mark due to the weather and these tyres.

The first time I took the B along with me on the metro. 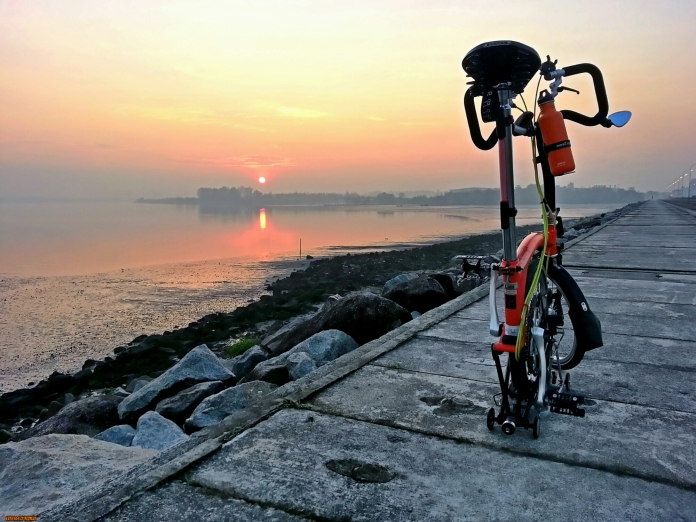 Managed to catch the sunrise on another ride to a neighbouring town with the Missus, after both of us swapping out the Tannus for Marathons.

Missus’ Dr Seuss against a field of lallangs. 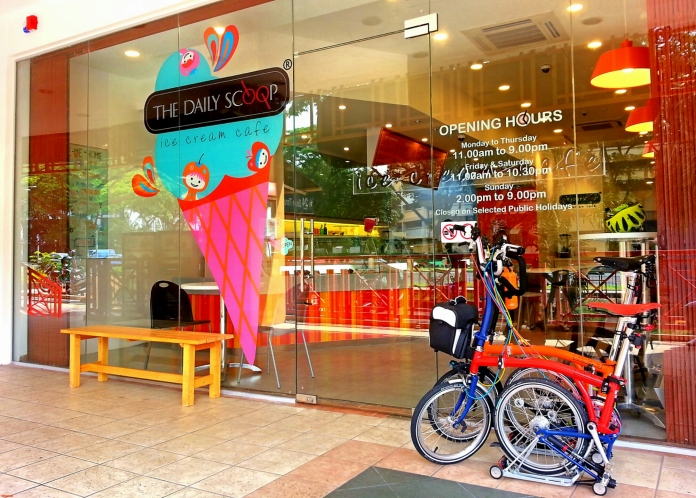 Missus’ reward for her first long distance ride after a long time.

The local Brompton group, Brompton Riders @ Sg, celebrating its second annual Brompton Day where Brompton owners came together to ride together and network. We had close to 190 Bromptons turning up on that day.

Met up with a few riding buddies for a ride for coffee and food. At the same time, conducted a post-mortem and forward planning for the following year’s anniversary and some upcoming events for the year.

Reconed a route for a ride the riding buddies and I were hosting.

The ride hosted by the riding buddies and I to a waterfront jetty. 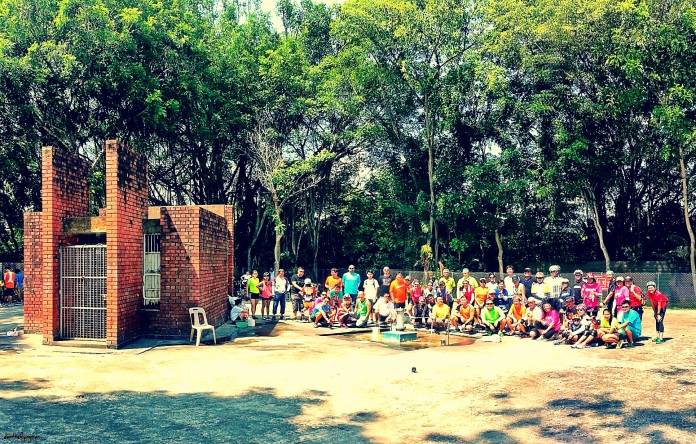 After the waterfront jetty, we headed to the last hot springs in the country. 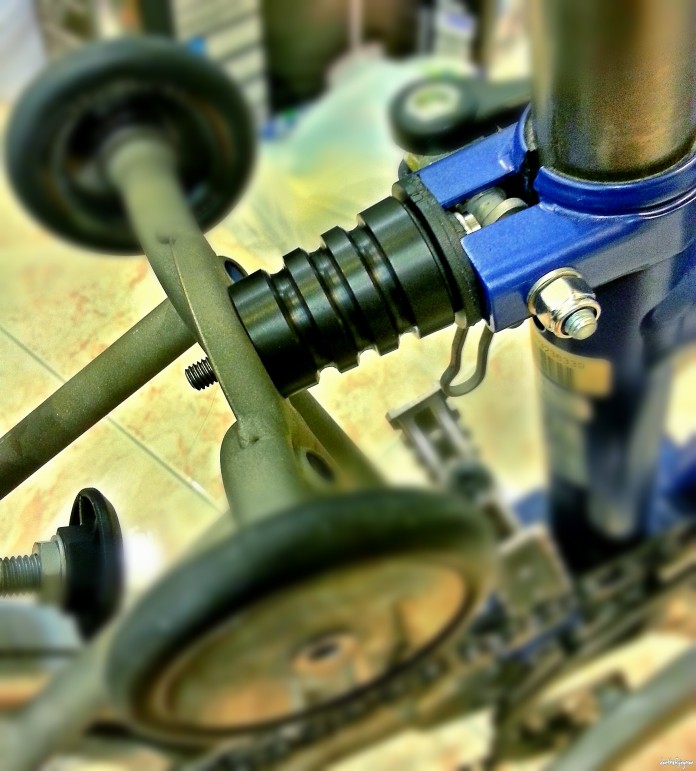 Managed to get hold of two pieces of these extremely hard 3rd-party suspension block. Ti B is now a hardtail.

Cleaned the Ti B after a month of acquiring it from the previous owner. This B would have rode more than 10 times by both owners.

The total distance and time taken for a recent ride with the riding buddies. Maximum speed reached for this ride was 30.6lm/h.

After the recent ride with the riding buddies, and only less than 24 hours since it was cleaned. All muddy and wet.

Have always planned to get a Titanium Brompton or something that is sub-10kg in weight (Tyrell, Alex Mouton, etc) for speedier rides. So when someone was selling a 5-rides, less than a year old Titanium Brompton, and with a waiting period of 3 months for a brand new, I grabbed it after viewing.

Swapped out some stuff that came with it on my own and had more weight reduction parts installed at the distributor.

Took it out the night before to get some dinner.

It is a gorgeous piece of equipment. I was flying on 54T crank and Kojak tyres at less than 10kg.

Missus has been experiencing very bad back pains in recent months while riding. Thinking that it could be the saddles, it was changed from B17 to B67. She loved the B67, but it still gave her the pains. When a pal advertised that his Selle Anatomica saddle for sale, and having heard so much about comfort on this saddle, I grabbed it and installed it on the Missus’ B.

In matching colours to Missus’ B. 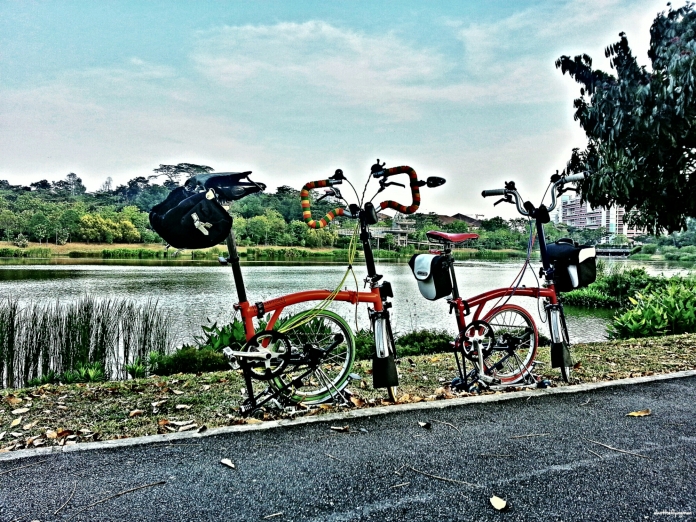 Brought it out for a very short ride to assess how the saddle fairs for her. Too short a distance to tell.

With me having returned from Shanghai from a working trip 2 weeks ago, I dropped off our Bs at the distributor for a long overdue full servicing plus some upgrades for the Missus’ B. One of these upgrades was to swap out the Tannus tyres on hers to Schwalbe Marathon tyres. We concluded that it could be the tyres being too hard and not offering much absorption for her. 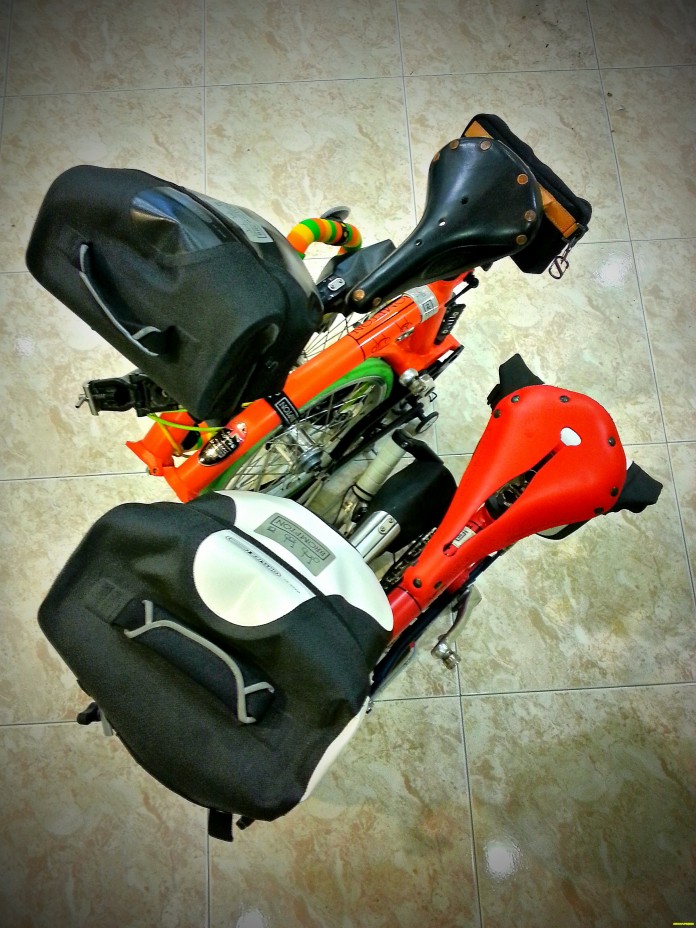 Back from the distributor.

Out and about that very weekend for a ride, after having breakfast.

Considering that we rode close to 20km and Missus not feeling much sharp pains, except for occassional aches, I am happy to say that the swap of tyres have helped greatly.

One last thing for this post. The times when she was on Tannus tyres have trained her stamina and fitness greatly. So much so that she was zooming off on the new tyres.

Picked up a Kamoya Jenny Suspension Block with extra hard red elastomer and a pair of Kamoya Hinge Clamps from the local distributor. 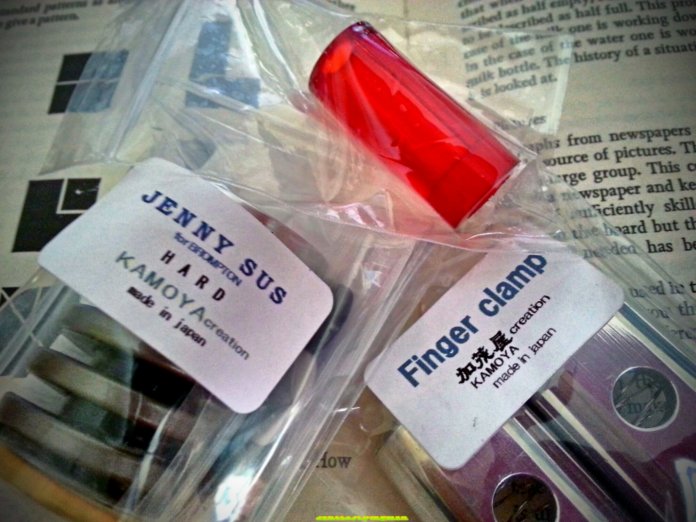 Had always wanted the Jenny to replace the stock Brompton firm suspension block for a firmer ride to reduce the bouncing of the B.

How Jenny looks after installation.

That night, brought the Bs out for an evening ride and stopped by a local seller of satay, pieces of meat skewered onto sticks and barbecued over fire.

The ride with the Jenny installed was so much better than when it was on the stock firm suspension block. Definitely worth the upgrade.

Installed some aftermarket parts brought in by the local distributor. These are parts made by a company called NOV, which hails from South Korea. Some of the parts are titanium, thus lowering the overall weight of the Brompton a little.
Of course there are more stuff on the Brompton to change to titanium parts but for now I will leave it as it is.

The NOV parts that are installed. 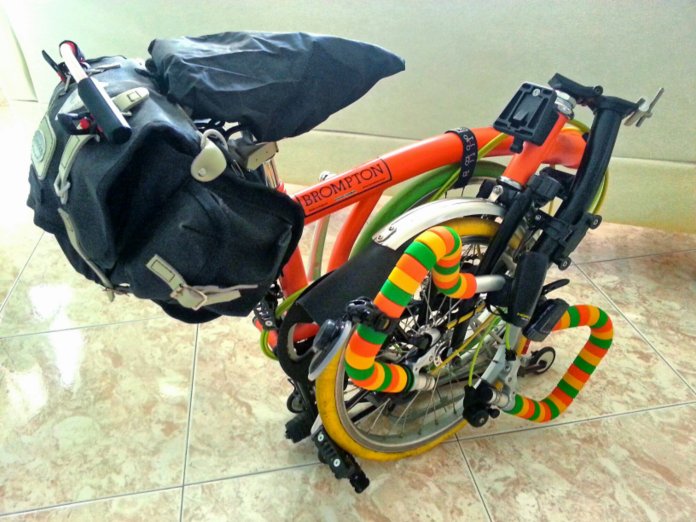 At the same time, I have placed the GripRings back onto the handle. Abandoning the orange-black only project.

Gotten a set of the new version of the Brompton toolkit too.

Can’t wait to bring it out for a ride again.

I have had the intention of modding another Brompton to give it a classic look. But I  decided against it. So, Citrus will move from a high profile look to a classic look. It will be a ‘work in progress’ kind of mission.

A fellow Brompton owner was doing a mass order on these Nisnas wooden fenders. Got my hands on 2 sets of such fenders to be installed onto our Bromptons.

In addition, I finally found a Carradice Barley that can hold everything i put in my Ortliebs. Still keeping te Ortliebs for any tour riding. For now, local rides, the Barley will do just fine without any front bags.

During the last month or so, I was also looking to get KleenKanteen bottles to replace my 1.5 years old Kathmandu thermo bottle I have been using for my coffee daily. KleenKanteens are expensive here. Costs $59 for a 20oz insulated bottle. And I need 3 of them. So off I went into Amazon and placed an order for the bottles I needed. What I paid for got me 5 KleenKanteen Bottles (1 12 oz, 1 16 oz, 1 20 oz insulated bottles and 2 27 oz stainless steel). With the same amount of money,  I could only get the insulated ones if I had bougbt locally.

One of the 27 oz came in today and it is the one I intended to use with Citrus. Purposely chose an orange to match Citurs. Now awaiting for its bamboo cap.

Missus was contemplating selling Dr Seuss, her B, to get a Titanium model. After a few days of putting it up for sale, she had a change of heart because Dr Seuss held too many memories for her.

So she decided on giving Dr Seuss a facelift instead. The main change is to the stem and handlebar, from a P to a H. After testing riding a H-bar Brompton, she fell in love with the upright riding position.

At the local distributor, a fellow Brompton owner had brought her dog along. It is one extremely well-trained pomeranian. 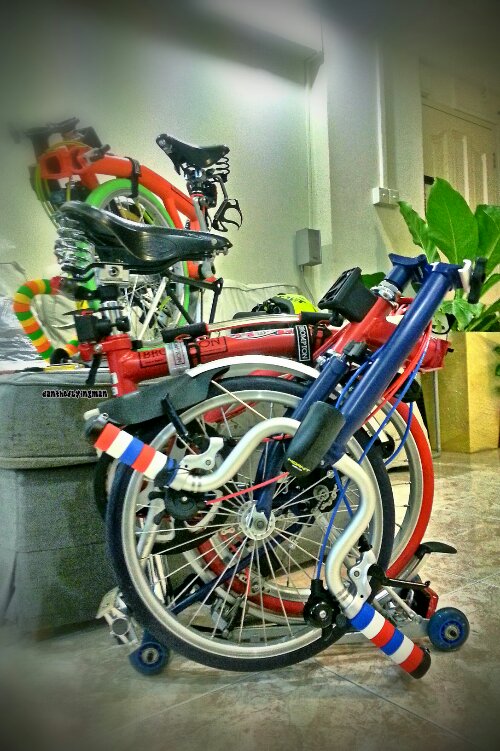 When Dr Seuss was back home, I replaced the rear reflector with a Cateye Reflex Rear Light. This will greatly enhance the rear visibility of Dr Seuss.

My make-shift work bench. Here, I am replacing the rear reflector on Citrus with the Cateye Reflex Rear Light, after changing Dr Seuss’.

When we go for our night rides, I will take some shots on how the rear of the Brompton has been greatly enhanced using a combination of the Cateye Reflex Rear Light and the main rear lights we have om our Bromptons.

For the last six months, I have had the front headlight mounted on the lower bars of the P-bar. Have always wanted to mount it at where the front reflector is so that some space can be freed up on the handlebar.
When the local distributor told me that it is possible to do so via an adapter, I immediately said yes. Had to use another front headlight on the new adapter.

This is the new front headlight, Silva Velo.

Depending on what one’s criterias for a front headlight are, all three front headlights are actually very good. I need something which is very centre focused as the primary light source to light up the immediate area in front of me. Thus I tend to lean more towards the NiteRider 300 Plus. 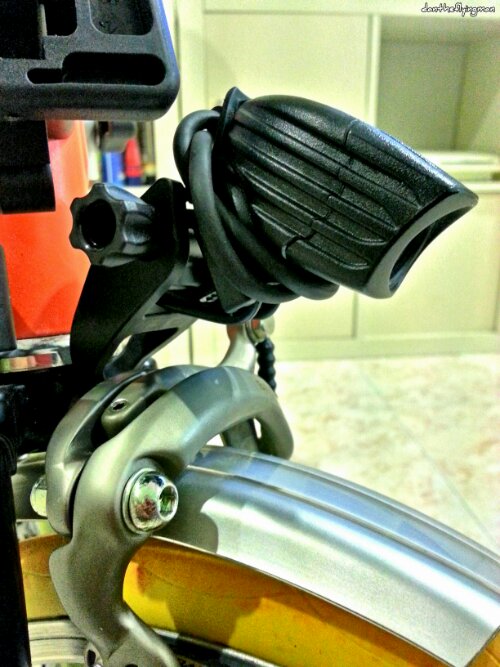 Here’s how it looks like. Had to stretch the elastic band over the adapter. Two issues. One, the top end of the elastic band rubs against the lower corners of luggage block when the handlebar is turned. Two, with a bag mounted onto the luggage block, the front headlight cannot be tilted too high up. Something I will have to live with.

In addition, the need for speed also tempted me to upgrade the stock 50T chainset to a higher 54T chainset.

Difference in diameter between the two chainsets. Stock 50T on the left, upgraded 54T on the right.

Time to bring out the B for a spin soon to test its new modifications.